As with our previous virtual meet up, we began with a quick introduction game to get to know a bit more about everyone, including our favourite colour LEGO bricks. Once that was done, the first challenge of the evening was a spring build challenge, constructing a tower of 2 x 6 plates in a spiral pattern to create a basic LEGO spring.

While people were building their springs, we had a general chat, which resulted in one member giving a demonstration of their custom printing business where we saw the process of transferring custom designs on to facemasks. A couple of other members in the meeting loved the idea in the current pandemic situation and promptly placed an order with Lof-Tee's there and then. 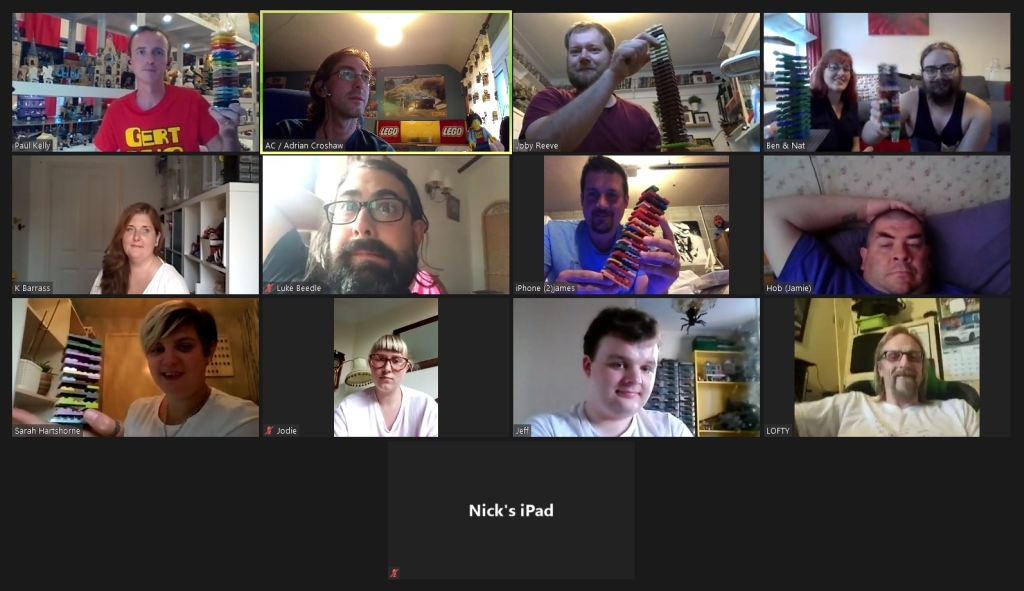 After a demonstration test of each person's spring bouncing, there was a quick vote to determine a winner and then on to the next challenge. This was a little different, with the aim being to find four items that weren't anything to do with LEGO as quickly as possible. Each of the items had to begin with the letters of the word 'LEGO', one item for each letter. Items found included a Ladle, an Egg, some Goggles, an Orange, a Lamp, an Extinguisher (of fires), a Golf club and an Ornament. This proved quite a difficult task to accompish in a short time period, trying to think of things for each letter, but was certainly a fun challenge.

We then had a general chat until the end of the meeting, which included discussing recent LEGO releases and the LEGO Brand retail store that is due to open in Bristol during November. We also had a brief chat about fundraising for hosting the Bristol Brick Show in 2021, which is hoped to be even bigger and better than last year's show. Finally, there was some discussion on the next collaborative build project, with a couple of previews of what people are building for it, that is due to be displayed at the 2021 Bristol Brick Show.

All in all, it was another enjoyable virtual meet up.