What is an AFOL? Why is that a BURP? Who's Rory and why does he have a STAMP?

If you've ever asked any of those questions, we may be able to help you, although that last one depends on the context. As with many hobbies, there is a large amount of language used within the LEGO community that is made up of acronyms, nicknames and other terms that you may never have heard before. Find out more in the glossary of terms (or brick-tionary) below to find out what AFOL, BURP, Rory and STAMP refer to.

How LEGO bricks are measured - When describing the dimensions of a LEGO brick or part, the length and width are usually measured by the number of studs on top, or the equivalent number of studs that would be there if not. The vertical measurement of larger parts are usually measured against standard brick heights. In the case of the BURP (see below), the total size is 4 studs wide, 10 studs long and 6 bricks high. 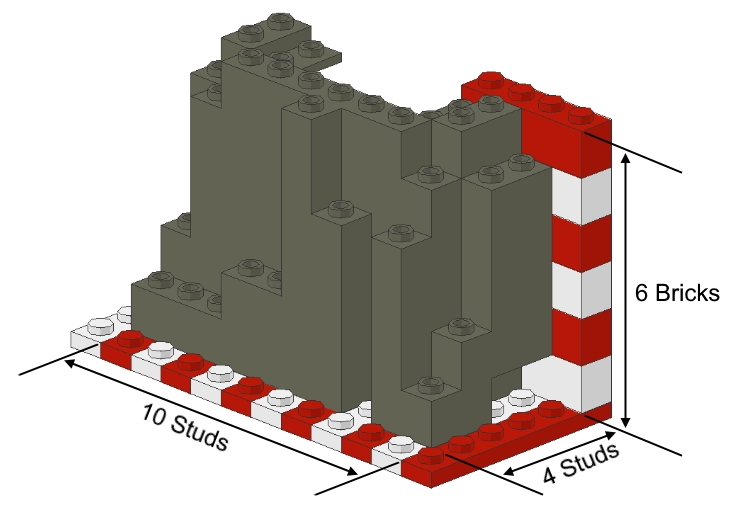 AFOL - Adult Fan of LEGO - If you like LEGO and are aged 18 or older, you're probably an AFOL. See also TFOL.

Baseplate - These are the really thin bases that LEGO produce to build models on that are less than the thickness of a plate. They only have studs on top and cannot have parts directly joined below them due to their thinness and method of manufacture.

BPS - Big Parts Sink - This usually refers to a large model that requires a high quantity of parts for relatively little benefit.

Brick - The basic range of LEGO parts are known as bricks. They are three times the height of a plate or tile. Very often, the term 'LEGO brick' is used to describe any type of part produced by the LEGO company.

Brikky Brick - An alternative name for the Brick Brick or Masonry Brick.

Corner BURP - Similar to the BURP, this is another panel piece (part number 23996) that resembles part of a rock face. This diagonally symmetrical design measures 8 x 8 x 6 and was first produced by LEGO in 2016. Also known as a MURP - Medium Ugly Rock Piece.

Dalek Brick - A 1 x 1 brick with a stud on all four sides (part number 4733). Named by LEGO fans after it's vague resemblence to the well known alien monsters from Doctor Who.

Davros Brick - A 1 x 1 brick with a stud on one side (part number 87087). Similar to the headlight brick, but without the inset side. As with the Dalek brick, the fan name for this part also comes from a Doctor Who character, Davros, who could be considered as 'half a dalek'. Also known as a Ross Brick.

Dot - Sometimes used to refer to the 1 x 1 round plate. See also Stud.

GertLUG - A Bristol based LEGO User Group - The name comes from a play on words based around a Bristolian saying; Gert Lush.

Gert Lush - A Bristolian saying that means 'Really Nice', 'Very Attractive' or similar depending on context.

Greeble - Pseudo-technical detail added to models, usually on space or other science fiction themed models, to enhance their appearance. Also known as greeblies or greebling.

Headlight Brick - A 1 x 1 brick with a stud on one side that is inset slightly (part number 4070). Commonly used in early LEGO sets to attach headlights to vehicles, this is one of the first forms of SNOT brick, being designed in 1979 by Erling Dideriksen. Also known as an Erling Brick or Washing Machine Brick.

LUG - LEGO User Group - Any organised club or group who use LEGO bricks. There are a large number of LUGs around the world, many of which are focussed in a particular area. A lot of people join more than one LUG whether they live in or near those LUG's central areas or not. See also RLUG.

Masonry Brick - An alternative name for the Brick Brick or Brikky Brick.

MILS - Modular Integrated Landscaping System - A set of standards for building a modular landscape that will join up seamlessly with modules built by other people. There have been a number of variations over the years, but this named standard system was first established in 2011 by members of HispaBrick Magazine. The MILS standards are available to view on Antonio Bellón's website by clicking here or in various issues of HispaBrick Magazine.

MOC - My Own Creation - An acronym created by the LEGO Group to describe fan models when featured in magazines and other media. Usually a MOC is a model built to your own design without following any instructions.

Mod - Modification - Usually used to describe a model that has been modified from an existing LEGO model that still resembles the original design. Possible mods could include an improved construction technique or expanded detail.

Neo Classic Space - Space themed models that have been inspired by the original Classic Space sets but using more modern parts and techniques to add more detail and realism.

Plate - Similar basic range of LEGO parts as bricks, however they are a third of the height so three 2 x 4 plates stacked on top of each other are the same as a single 2 x 4 brick.

Rory - A standard 2 x 4 Brick - Rhyming slang, this nickname came from a phrase along the lines of "I need another two by four-y". See also Half Rory.

SigFig - A LEGO minifigure representation of yourself or another real person. Usually using official LEGO parts to get as near a match as possible, some people also get parts custom printed to get that extra feature or detail that isn't available in the official parts range.

SNOT - Studs Not On Top - A building technique where LEGO bricks are positioned sideways or even upside down so that the studs face in a different direction to upwards. See also SNOT Brick.

SNOT Brick - LEGO parts that have at least one stud facing sideways when connected upright. This allows different shaping in a model where parts can be attached on their sides or even upside down.

SOBS - Studs On Both Sides - This generally refers to a part or construction technique that doesn't just have the studs on top, but has them on two opposite sides. See also SNOT and SOSC.

SOSC - Studs On Side Construction - A building technique mostly used to describe the construction of brick built roads or other scenic bases for display models where the majority of the parts that are used lie on their side to give a smooth upper surface. See also SNOT.

STAMP - Sticker Across Multiple Parts - We've all had a LEGO set containing a sheet of stickers to apply to individual parts of the completed model to add extra details. Up to and including the early 2000s, some of the stickers were intended to span across more than one part. The last set to include a STAMP was number 10219 Maersk Train, released in 2011.

TFOL - Teenage Fan of LEGO - If you like LEGO and are aged between 13 and 17, you're probably a TFOL. See also AFOL.

Tile - Similar to plates, only being one third of the height of a brick, however a tile does not usually have any studs on the top surface.

WIP - Work In Progress - Commonly used to describe something that is either still under construction or still requires refinement before it can be considered finished.