At the beginning of October I was able to go and visit STEAM for the first time. I have been trying to go for the past few years but things always got in the way. Well, finally, my time had come. I made the early morning walk to the train station and caught the train to Swindon. There I met up with GertLUG member Hannah and we ventured on to the STEAM Museum. Once we had paid our entrance fee (£13 - this did include access to the whole museum, as well as the LEGO exhibition which was amongst the normal exhibits) we walked through the big doors with high anticipation.

We walked on through past the different railway themed displays until we came to the first section containing LEGO. The were a few displays that I recognised from other events but then our eyes cast over a massive LEGO build of the Peterloo Massacre. It was epic! The detail was just mind blowing. We spent a good amount of time looking over all the detail and trying to work out what pieces and techniques had been used to make it. After quite some time, we ventured on through the museum past huge, old, oil smelling train engines until we came across a big hall containing a large amount of LEGO displays.

In this hall we bumped into other members of GertLUG and AFOLs we have met at previous events. There was a huge collaborative street build, Minecraft MOC, massive indoor zoo - on multiple levels, a gigantic sewer baby and the biggest GBC (Great Ball Contraption) I have ever seen. The GBC was out of this world. I find things like this absolutely mesmerising, confusing and complicated. The effort that goes in to them is amazing. This one had a section that raised around 7 or 8 foot off the floor and looked like something out of Stargate (or that kind of thing).

After we had spent a good time in the main hall looking at all the builds and chatting to friends, we headed off to the marketplace tent. There was a good selection of LEGO on sale from the LEGO Store Milton Keynes and other independent sellers. We came across two sellers in a corner selling second hand loose LEGO where I set about searching for grey and brown bricks for my latest MOC (come and see it at Bristol Brick Show). After a good hour of searching, stacking and squishing bricks into pots and bags we came away with everything I needed.

By this time we had been at STEAM for around 3 hours and started to feel a bit on the hungry side, so we left in search of food. Over all I am glad I have finally made it to STEAM and I will be back again next year! 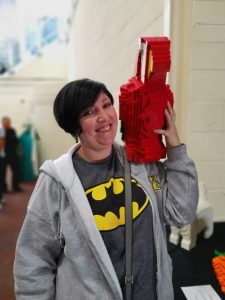