Hannah and Emily went to 'Women in LEGO' virtual event and here is an overview of what happened.

This event was organised by the Vice Chair of Northern Brickworks, Amanda, because their membership wanted something specifically for women and why not do it for International Women’s day.

The first organised speaker was Jessica Farrell, of LEGO Masters fame, speaking about how she first got into LEGO. As a 7-year-old girl she loved playing with LEGO but it was also the time she learnt about what were stereotypically ‘girl's toys’ and ‘boy's toys’. There she was looking at all of the LEGO that she loved playing with, in awe of all of the options. The shopkeeper said ‘do you not want to go and look and the girl's toys over there with the dolls.’ From then on she was fed up of not getting LEGO for her birthday so 10 year old Jess wrote a letter to LEGO saying that she was fed up of being told that LEGO was a boys toy. LEGO responded saying that they already built toys for girls because every brick they make is for boys and girls equally. From there she was inspired to build trains and airports and other things that she was interested in no matter if it was classed as ‘a boy’s toy’ or ‘a girl's toy’. Her favourite set has always been the classic yellow castle.
It wasn’t until her children were at the age of playing with LEGO that she picked up LEGO bricks again. From MOCs to LUGs to events Jessica learnt her first lesson; MOCs must be movable. Her next MOC was built in sections so it could be moved to exhibitions.

Looking at the AFOL community, Jessica thought there were a lot of female AFOLs but soon discovered that many were there to either support their husbands or were less dominant in the community. Perhaps it was a throw back to that moment in the toy shop that other young girls had also experienced. Now LEGO are creating more female friendly sets, these young girls don’t necessarily have that experience.

LEGO Masters UK – Jessica said 'the comradery and social side was so much fun', and this was the push she needed to start building models as a full-time job. Now she has done models for many places like Center Parcs, LEGO House and Liberty Department Store. Jessica reminisced about how she was reliving her childhood fantasy when she was placing the model in Liberty of being in a department store in the middle of the night.

Our second speaker was Mariann Asanuma who is a professional LEGO artist of 18 years. She worked at LEGOLAND California as a master builder and was the first female to do so. Mariann started building with LEGO at 6 years old and never had a dark age. It was also her favourite toy and from the age of 9 she set her heart on being a master builder. She had no idea how because they were on the other side of the country or in Europe but that was her goal. She applied 5 times for LEGOLAND California and didn’t get the job over 2 and a half years but on a whim applied for a retail position which she got. From there she networked and studied the models at the park. An avid reader of the Ultimate LEGO Guide, she would reverse engineer the models. She also used cross stitch patterns and turned them into mosaics. She practiced building in mini-land scale and lettering to show her new bosses her skills. Mariann continued to learn and practice more intricate skills and uses complex SNOT techniques in her builds. Her builds are now in LEGOLANDs all over the world. She went on to publish two books ‘Beyond the Ball’ and ‘Building Secrets’. If you can build a ball, from there you can mould that into any form like a face or a piece of fruit. The books include techniques on how a master builder thinks about building a model and what process a master builder goes through. 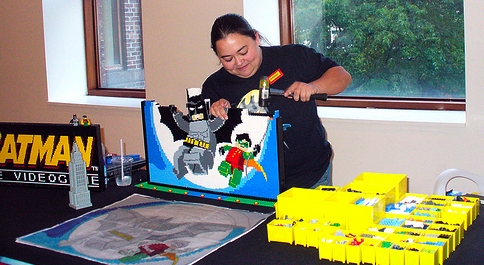 Years later, still an AFOL, by chance at San Diego Comic Con she connected with Warner Bro’s when they launched the LEGO Batman game. They flew her out to New York and paid her to build a LEGO Batman mosaic at the launch party.

‘Well, hey if they’re going to fly me to New York and pay me to design and build this mosaic then maybe this is what I should be doing’.

From there she created Model Building Secrets, not only to do large commissions for the likes of McDonalds, Google, NASA and John Hancock, but to share with other builders the techniques she had learnt on her journey. Marian likes to also focus on the small stuff like jewellery, wedding toppers and desk sized models.

HOT TIP on mosaics – Bricksaic helps you work out the colours and is free.

Huge thanks to Amanda for organising and Jessica and Mariann for telling us about their story and, of course, all of the lovely ladies who got involved.