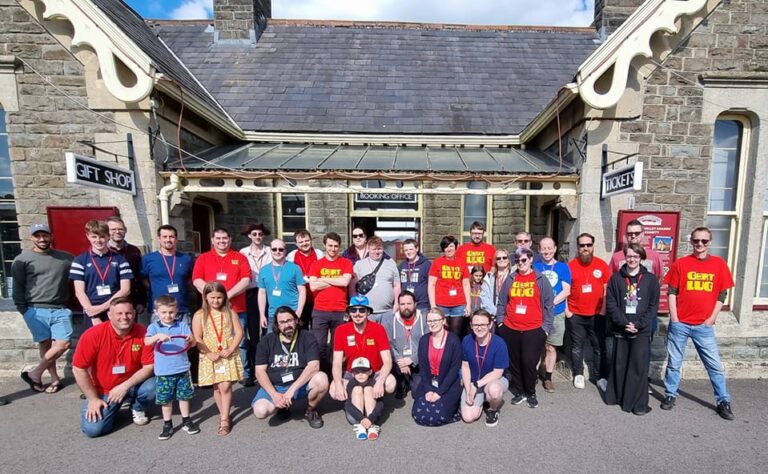 Brick Express, Avon Valley Railway - The reflections of a noob

The main thing that surprised me about my first ever show as an exhibitor was how nervous I, as a grown up person, could get about it.  But still, here I was, at the advanced age of *CENSORED*, in my first ever Brick Express at Avon Valley Railway with the GertLUG posse.When I started putting one brick on another to help with anxiety a couple of years back, a little spark reignited a flame that had been out for a very long time.  I realised that the enjoyment of creating in this way had only been dormant and I began to build things from instructions and from my imagination.  A little while later, on the suggestion of a friend and after a quick google, I was the proud recipient of a ‘welcome’ thread on the GertLUG Facebook group and, once we were all allowed out again, at a place I thought I’d never be - exhibiting a build of my own in public!

Brick Express was, in hindsight, a great one to begin with. At the end of the weekend, some of the more experienced folk were commenting how quiet the show had been, but I had found it at just about the right level - I might have been a bit overwhelmed at a busier show first time.  As it was, the opportunity to chat to interested people about the build - the inspiration, the process, the tricky bits - was great fun.  It surprises some people to know that I have an introverted, anxious side, but give me something that I’m really interested in to talk about and I’m definitely up for it.

The show itself seemed really well organised, and I was impressed by the liaison between the GertLUG folk and the venue.  The layout was very good given the space available although as the only single exhibitor whose table was in the middle (my choice, given the layout of my build) I lost count of how many times I turned through 360° looking for whomever was next approaching.  The build has some interactive elements and I love that - being able to touch as well as see is an important thing for me - but I can see how problems might arise with both the all-around view and the moveable elements at a busier show.  I definitely need to look at making the build more manageable from this point of view.

It was great chatting to the range of people that came through over the weekend.  From the ‘must photograph everything’ person zooming through who nevertheless appreciated a suggestion of a good angle, through the ‘I could never build something like that’ folk who were interested in how one got to having a model that doesn’t really fit in one’s house, to the really excited and into-it enthusiasts who needed to know every detail.  My favourites of the latter were the two young people who came back to see me three or four times and on that last visit brought a parent and proceeded to give them the tour of the build better than I had been doing all weekend.  If I’d known about them earlier I think I could have taken the Sunday afternoon off!

Equally fun, of course, was having the chance to see the full range of other people’s builds - to understand and appreciate how things had been achieved and sometimes to just stand and soak the details of a build in without worrying about ‘how’.   Complementary to this were those moments where an appreciation of technique made the effect of part of a build even more impressive, especially when a ‘simple’ twist such as a colour change from the norm has been used.

And so, I went from Nervous Noober to Excited Exhibitor over the space of a weekend.  For a lot of us, building MOCs is where we’d like to be, but the sheer quality and, often, size of models that we see at shows can be a bit disheartening.  GertLUG are an amazingly supportive group for this and I wonder whether two or three times a year a ‘private’ exhibition where less experienced builders can bring models for AFOL friends to see ‘in person’, make helpful comments about, pass on hints and knowledge and so on.  I was fortunate, I think, in that lockdown gave me a perfect excuse to work on my build for a long time before showing it to anyone, and even then the help I got on earlier iterations was invaluable in improving the model as I went along.

So, thanks to the bunch of you that encouraged this to happen, thanks to those of you that organise shows generally, and this brilliantly local event in particular, and thanks to Nick, for ensuring that we all got two commemorative bricks.  Here’s to the next one!

**Thanks to Kunnagh Scott for the excellent words**