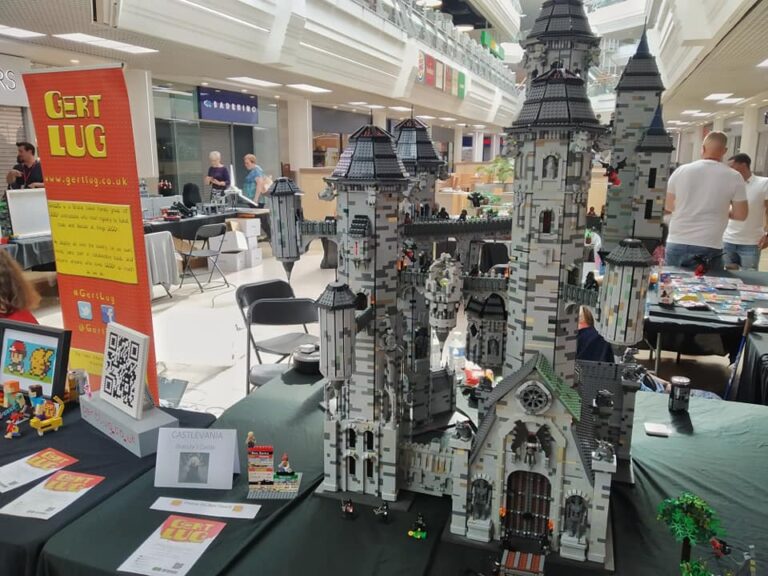 After well over a year of no LEGO shows at all, and with no opportunity to host our main Bristol Brick Show this year, we were thrilled to be given the chance to work with The Galleries shopping centre in Bristol to put on the biggest LEGO show Bristolians will get to see in 2021. Held over the weekend of the 21st and 22nd of August, and filling the whole downstairs level of this much loved 3 story shopping centre, this show really was designed to provide a bit of light relief and entertainment for thousands of people who we know have endured some difficult times recently.

With over 30 displayers, plus many other willing volunteers, and with a number of never seen before displays out in public for the first time this was an exciting event for us as a LUG but also, we hope, for the general public to come and enjoy. The Galleries itself was an excellent choice of venue as it's very well lit, has plenty of space for people to move around in (and importantly feel safe in) and also had plenty of food and drink options for our hard-working team! Many coffees were drunk over a long but enjoyable weekend....

To list every build and detail here simply wouldn't be possible but there were some key displays which stood out for us as well as clearly being very well received by the general public. As you first entered the Galleries from the Cabot Circus end the first thing you'd see would be Huw and Darren's vast Great Ball Contraption (or GBC to LEGO afficionados). This is a constantly moving machine that is designed to move small LEGO balls along in a variety of ingenious ways. It's white-noise hum and repetitive but intricate movements fascinate everyone from the youngest children to the oldest engineering minds around.

Next along, and with some different movement of it's own, was Luke Bradley's LEGO train layout. Numerous custom trains all built by Luke himself were laid out here in the largest circular layout he'd ever been able to put together. The detail and perfectionist nature of his train building was certainly appreciated by many adults whilst the children loved watching the trains fly by or even chasing them around the tables, especially the Thomas the tank engine based models.

Further along Simon Pickard (Google him, he's built tonnes of great stuff!) had some brilliant smaller builds of everything from well known castles to Samson's Final Act and historic Roman Ballistas to the collapsing Walls of Jericho. Each model perfectly finished and using building techniques that were previously unknown to science!

Moving past Simon to our main central area our own committee were out in force and all with displays that hadn't been out in their finished form in public before. Emily Poole's vast Minecraft Deathstar with 360 viewing made a real impact and not far away Ben Rowe's 5ft tall Castlevania build was a real engineering and structural masterclass with numerous creepy figures to enthrall (or perhaps scare!) the children.

Nick Amos had his enormous lake build which included everything you might expect at the lakeside, campers, dog walkers and obviously sharks and octopuses too! Tucked in behind Nick's build was a sneak peak of our collaborative Pirate Cove build (thanks Hannah Gwynne) which we expect to be on display next year and may be the biggest overall build GertLUG has been involved in to date. Keep your eyes peeled for that one me hearties!

Opposite those two committee member James Cole, alongside brother Mark, had what must have been one of the more impressive Star Wars LEGO layouts ever seen in the UK. The culmination of a few years of work and with sections previously shown individually now in one enormous and detailed build (complete with it's own miniature GBC) it captured the attention of every passing shopper and Star Wars fan alike.

Our next section featured multiple builders with their unique styles. Thomas Woodman's amazing custom Brickheadz, Lee Stanley and his huge 'Pandemic' themed city layout, Dan Jarvis with his multitude of perfectly formed Star Wars builds and much more from other great builders.

Attracting a lot of attention, and generating much joy and fun, was our new remote controlled car zone. Multiple remotely controlled LEGO vehicles were there to be driven, and crashed, by the public and kids and adults alike loved being able to get involved. Behind that was Alexis's ever fascinating LEGO brick sorter, a huge Technic based masterpiece that amazingly can sort different shaped bricks into different containers.

Finishing off the displays were a huge funfair layout, courtesy of Matt and Sabrina, with too many figures to count, numerous moving rides and quirky details and it's own classic LEGO airport as well. next to them were a giant yellow castle by PK, Jamie's custom modular buildings and Jason with his version of Chinatown (featuring some popular Ninjago sets) and a giant wall mounted International Space Station.

There were other great builders and fantastic creations in amongst all of those above and we would like to thank each and every one of those who contributed for making it a truly memorable and enjoyable show. We'd also like to thank every member of the public who came along (even if you stumbled across us by accident!) for your kind words, appreciation and obvious enjoyment. It meant a lot and it was a treat to be able to to talk to people, share our passion for LEGO and perhaps inspire some new builders out there. It must be said that it was especially nice to see so many without masks on, not because we have forgotten the virus exists, but simply to see the smiles, talk to people clearly and be able to interact on a more personal level, something I feel we've all missed out on this past 18 months or more.

Thanks again from all of us at GertLUG, thanks to the Galleries for hosting us and hopefully we will see you all at our next show, just join our public Facebook page to keep track of what we get up to next!

Lastly a shout-out to The Pahar Trust who are a brilliant charity that help support some of the world's poorest children in remote areas of Nepal. The show aimed to raise awareness for them with a minifigure hunt which many enjoyed and you can find more information about them at their website link below: