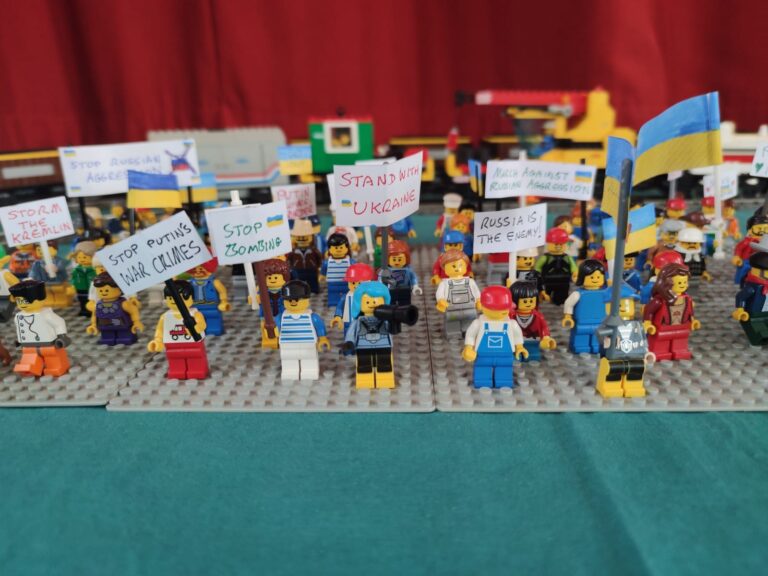 Held at Mangotsfield Secondary School in Bristol this local event was all for a good cause and went down very well with the public who were thrilled with the displays GertLUG put on alongside all of the other things to do. So let's take a look back to early April with a bit more detail from Dawn, one of the organisers:

Dawn and Luke, who organised the event, went to school with Gemma and Dave; who is currently battling brain cancer. In hearing the news about Dave, they made a donation straight away however it did not feel like enough. So, they came up with a few ideas to help fundraise for the family and so with the idea of raising money for Dave’s Brain Fund, The Brick and Craft Show vision was created.

The event was well supported by Mangotsfield School with free hire of its hall and foyer which on the day was filled the with close to 40 stalls. We are so pleased to be part of the GertLUG community without whom the event would not have happened. 15 lovely GertLUG members either displayed or volunteered on the day along with a further 15 creative art stalls and 5 fundraising stalls.

The fundraiser was quite a day where we welcomed over 900 visitors, many from the local area or associated with the sschool and also some from further afield. The event was constantly bustling with smiling faces enjoying the vast LEGO displays and the further entertainment and arts.

Children and adults alike enjoyed looking closely at the LEGO displays that included a fantastic mix of trains, monorail, space, Spider-Man city, a brick sorter, NHS hospital display (thanking the key workers), Star Wars, and Blackpool tower to name just a few of them. Colourful, intricate, large and detailed there was definitely something there for everyone to enjoy.

The day was finished off with a visit from a fire engine from Avon and Somerset fire service who did not disappoint. Children enjoyed getting to fire the hoses and also climb into the fire engine. Followed by the local entertainers Dancin' Tots who played the event out in style to disco tunes.

The event was such a feel good day and we're thrilled with the overall result which raised £2417 for Dave’s Brain Fund!

Some of Dave’s family volunteered at the event and wanted us to share their gratitude to everyone who made the event possible. They were really touched by the generosity of the community and GertLUG.

Thank you all and if you still wanted to make a further donation the link to Dave's Just Giving page is here: