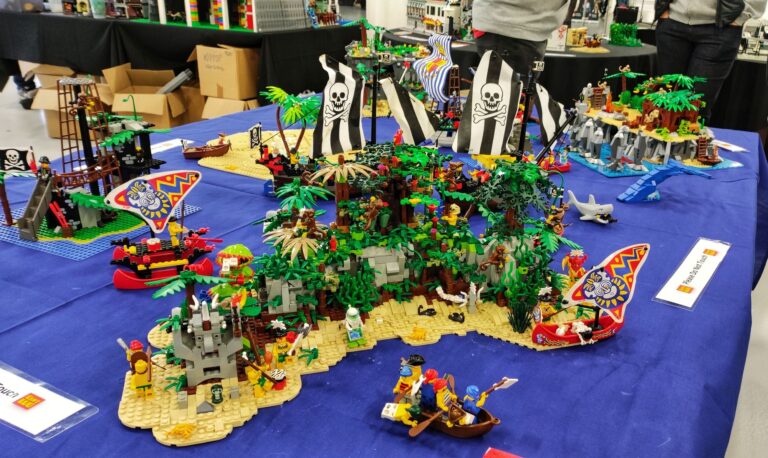 On the 6th of March this year GertLUG got the opportunity to display at the fantastic Comic Con and Gaming Festival. Held once again at Ashton Gate, the home of Bristol City football club, this was our second year in a row and we went in with high expectations for how the event would go.

Last year's event was held in the middle of the pandemic and as such the 2m rule applied and masks were worn by all attendees. Although this hampered the atmosphere and made interactions with the public harder on the day it was still a great place to be and a successful event for the LUG. Fortunately this year had no such COVID based restrictions and with around 20 members of GertLUG there on the day as displayers and volunteers our little corner was a colourful and bustling place all day long.

With set-up that morning from 7am we had plenty of time before the 10.30am opening and were organised and ready to go by the time the public started to stream in, which they did for the next hour or more as the queue stretched right passed our windows!

We had a great mix of MOCs on display with everything from Alan's huge classic space monorail layout to Greg's imposing and immaculate clone army. Alongside these Alexis was present, as ever, with her enormous brick sorter which drew a constant crowd.

Lee brought his vast halloween display down, previously on display in a shop front and now at Comic Con with added superheroes to please the masses of Marvel and DC fans that were around!

We had some great variety elsewhere with a zombie apocalypse, a city in the midst of destruction, a plethora of technic vehicles (at times being driven badly by thrilled children), an enormous Star Wars republic gunship scene and Adrian's fascinating and incredibly clean looking MILS layout.

On top of the LEGO we got to see endless cosplay costumes, the clear winner being our very own Jean Deacon in her LEGO box, had a visit from some friendly pirates (who seemed to enjoy our own Pirate Cove layout), watched the amazing (and amazingly loud) Titan the robot thrill the crowds and some members purchased even more LEGO from the traders that were there.

A great event to attend with it's accessible location, quick set-up and plenty of things to see and do we'll no doubt consider returning again if we get an invite! If you fancy displaying for the first time then this would be the one to go to, it's just so much fun. Thanks to all those who helped out on the day and those who displayed their excellent MOCs. We raised £562.09 in total which will go entirely towards the running costs of our main Bristol Brick Show (19th/20th November at The Bristol Pavilion!). See you there!